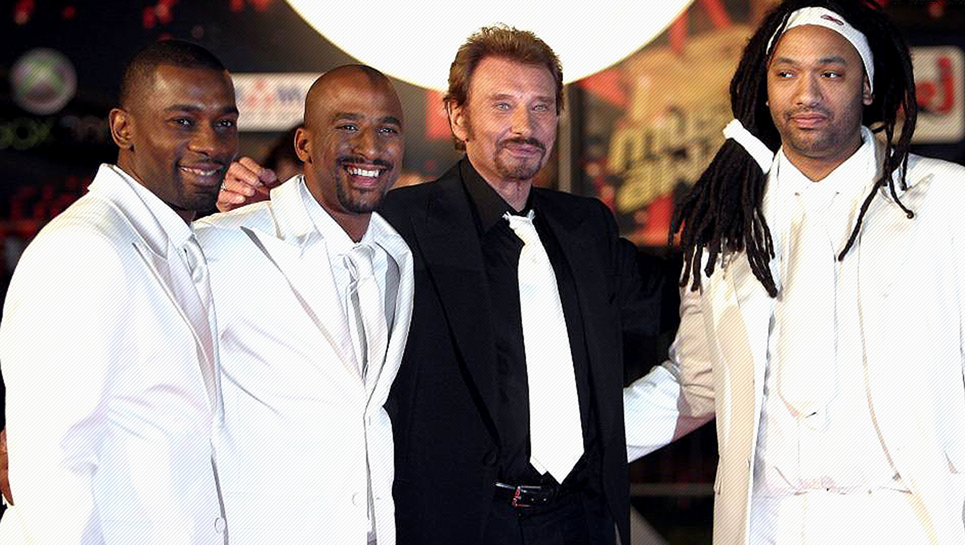 AN ORPHAN COUNTRY –  “L’idole des jeunes” in three generations, the man of 110 million sold records, The Boss of the show, the most appreciated french singer in the world leaves an orphan country : JOHNNY HALLYDAY passed away this night.

JOHNNY HALLIDAY FEAT MINISTERE A.M.E.R. – “ nothing fades, my destiny looks like me well. Our dreams, Our fists guided our refrain. And the time runs, but I’m sorry about nothing. Every mark, I built them with my hands. My dreams, our fists guided our destinies.” A lot of singers shared a rock moment with Johnny. Sometimes just for one song, like in 2006 with some French rappers  Doc Gynéco, Passy, Stomy Bugsy with the title “the time runs”. An interlude which has come in posterity.

OF LOVE –  His last album, « De L’Amour », came out in 2015 and  sounds now like a henceforth ( je ne comprends pas ??) . In this very personal album, Johnny Halliday broached more serious topics. The title “Dans la peau de Mike Brown” for example, talks about the murder of this young afro- american by a Ferguson policeman : “ I’ve been living in the USA for ten years. It’s a tribute to this young innocent man, Mike Brown killed by a policeman. Nothing justified such an act.”

JOHNNY IN TRACE MEETS MACRON –   In november 30th, during an interview for TRACE, the french president Emmanuel Macron mentioned the rock star as his favorite artist.

TRACE by the voice of his president Olivier Laouchez pays homage to a great artist :

“Johnny influences us all. His powerful voice, his stage presence, his engagement in his songs and his hypersensitivity were amazing. He loved people and he loved also much hip hop music. It’s a monument who left us. May he rest in peace. Our sincerest condolences to his family.

NEW — HOW WITH TRACE MEETS, THE GROUP TRACE WANT TO CREATE A LINK BETWEEN THE MULTICULTURAL YOUTH AND THE LEADERS OF THE WORLD.